This comes after a multi-year effort of by a coalition of multiple grassroots and grass tops organizations that formed in 2018 and launched in 2019.

Shortly before midnight on Feb 2nd, the MN State Senate has narrowly approved a requirement for the state’s electric utilities to provide carbon free power by 2040, after the MN State House passed an identical version on January 25th. This 17-year timescale is the state's most ambitious clean energy standard ever.

It is worth noting that Xcel Energy and Minnesota Power, made carbon free pledges on their own accord, but for a decade later in 2050.

With some exceptions, utilities would have to provide power that is:

There will be a process for utilities who don't think they can hit the above targets to ask the PUC for an exception, or to buy renewable energy credits to offset carbon intensive power that they continue to provide.

In 2007, the MN State Legislature passed the 25% by 2025 Renewable Energy Standard with a nearly unanimous, bipartisan vote.

Minnesota was able to meet that target eight years ahead of schedule. Utilities, grid operators, and energy producers had an easier time than expected integrating renewable energy into the grid and maintaining reliability in a way that has saved billions of dollars for Minnesotans.

Despite the Headlines, Xcel's 21% Rate Case is Absolutely Still On - Comment Deadline is Jan 6th

Yes, Xcel Energy is still proposing a historically high 21% rate increase and this would create greater hardship for those most struggling in this inflationary and post-pandemic period, inequitable rates for residential and low-income households, and invest in an outdated grid that perpetuates an expensive, fragile and highly centralized system.

Confused? Read on! But first, the main ways to weigh in, some talking points, and an event on the rate case... 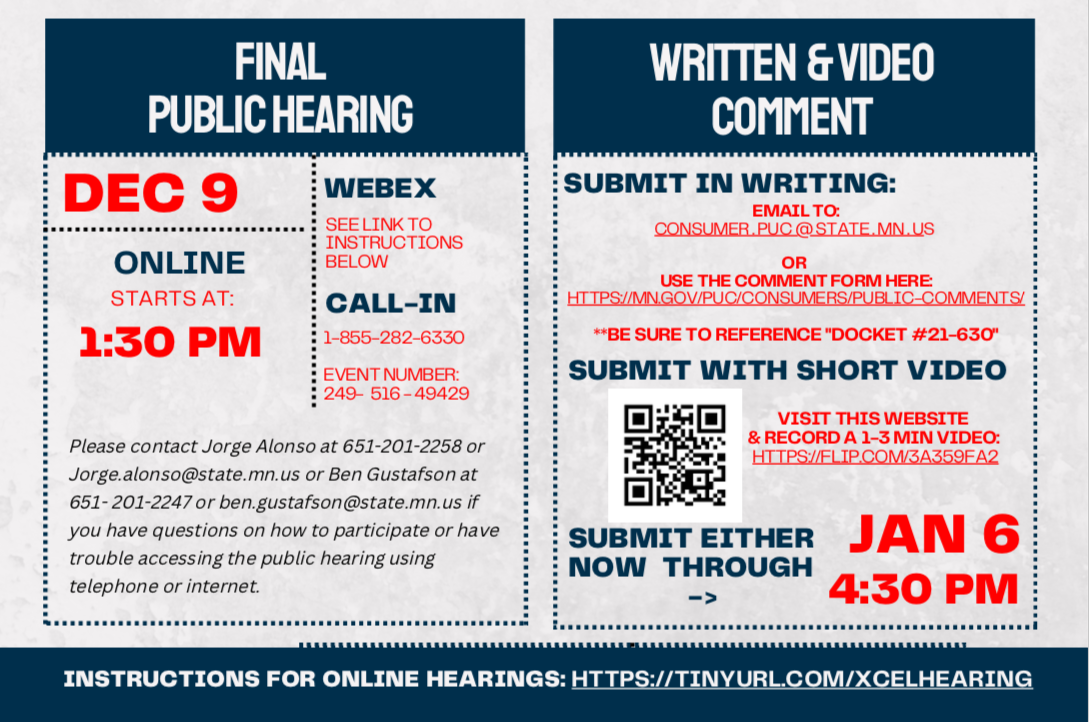 The good news is that the link to record videos is now fixed! You can directly record and submit short 1-3 minute testimony on this site NOW through January 6th, 2023 at 4:30pm. You don't need to do any downloading/uploading/or emailing. Just use the QR code below, or click on the image to direct you there and follow the instructions to sign in (you do not need to disclose your real birthday, by the way). That's it to submit!

The final deadline for comment is January 6th at 4:30PM:

In 2022 Community Power continued our utility justice work by fighting against Xcel’s 21% rate hike proposal - which includes seeking a guaranteed profit of ~10.2%. For the first time ever, we have mounted the ability to formally intervene - with the help of pro-bono legal representation from ELPC, and strong partnership of the Just Solar Coalition. If we invest in the grid, it should be to enable the resilient grid of the future not to line the pockets of Xcel or re-entrench an outdated grid. With our help, momentum for equity on the power grid is growing to get these issues of inequity and community control be taken seriously at the state-level.

On a short notice, we packed the hearing room with supporters wearing the Inclusive Financing logo button!

Community Power continued our 6-year long quest organizing alongside dozens of other groups for Inclusive Financing for energy efficiency, which does not require credit or income-tests, immigration paperwork, or property ownership. We held our ground at every step of the way, writing comments in favor of expanding access to energy efficiency improvements to renters and community members who have been underserved by preexisting energy efficiency programs due to the above barriers we continue to point out.

Make no mistake, this was an uphill battle. Some institutional names in energy efficiency mobilized to block even a pilot of this innovative well-tested but new-to-Minnesota Inclusive Financing program to preserve their own programs as the sole methods of delivering efficiency by putting forth positions that miss and sideline real stories from Minnesota saying what they want and need.

Thanks to our efforts, the width of the gap in who are not being served by existing efficiency programs is now clearly on record and supporters in the community are even more galvanized. This is only the beginning!

Hearings on Xcel's 21% Rate Hike scheduled in the Twin Cities

TAKE ACTION! Join the fight for energy democracy and say NO to unprecedented utility rate increases! Your voice and Public Comments make a difference. :

The Minnesota PUC has scheduled in-person hearings and 2 virtual hearings allowing you the opportunity to express how Xcel Energy’s proposed rate increase will affect you and your family. After expressed opposition by the Just Solar Coalition intervenors of which Community Power is a member, Xcel has agreed to add hearings in Minneapolis and Saint Paul.

There is a huge disconnect between what Xcel says when it's selling its energy plan ("we'll keep bills low") and then requesting a 21% electric rate increase over 3 years.

When Xcel wants to raise the rates which we pay for electricity, they have to prove to the quasi-judicial 5-member Public Utilities Commission that their rates are “just and reasonable”. The public hearings they provide are where you can come in.

Because utility companies are monopolies, they have the power to assert control over the market and prioritize the needs of their investors over their customers, unless held in check by these state regulators.

Can't Make it in person? Take part in these Virtual Hearings:

Click here for full instructions on how to write a public comment, submit a pre-recorded video testimony, or attend a public hearing:

This Summer, House Parties for the People's Climate & Equity Plan!

The City of Minneapolis has the scientifically correct climate goals on paper:

We need a robust People’s Climate & Equity Plan at scale for us to actually meet the targets.

In order to mobilize the City Council and the Mayor to pass something more than half-measures, the coalition campaign will be organizing outdoor house parties this summer.

I - Lee -  will be hosting one in Mid-July!  Community Power organized a series of 2-3 dozen house parties  before and they are a great way to deepen community relations.  Sign up here to host or co-host a "house" party and click here to see the House Party Toolkit  to learn what is involved.

To see what an "at-scale" climate equity plan could look like in action, check out this article: Minneapolis jobs program aims to grow and diversify clean energy workforce by Frank Jossi, April 11, 2022