The Minnesota Public Utilities Commission quietly helped along Xcel Energy’s request to use ratepayer renewable energy fund dollars to retrofit a garbage processing facility to provide more trash to burn in Xcel’s Red Wing, MN, incinerator. The $2 million grant would provide just under one-third of the cost to retrofit the city’s waste processing facility, enabling it to send up to 20,000 tons of trash per year to the Xcel-owned 20-megawatt incinerator. In selecting this grant award, Xcel bumped aside several other projects that scored higher on the Renewable Development Fund objective scoring system.

To place it in a larger perspective, this incident looks to be part of a broader network of shady deals between public officials and the garbage incineration industry such when Washington and Ramsey counties recently purchased a privately-owned garbage grinding facility in Newport, Minnesota.

Community Solar Garden (CSG) developers in Minnesota spent much of 2015 in a state of foreboding tension. They were being sandwiched between Xcel’s slow pace in approving project applications and anticipation that the 30% federal solar tax break would expire in 2016. This combination led many developers to dread that their CSG project proposals might never be built. This worry that Xcel’s delays would cause CSG developers to miss their financial window of opportunity motivated Community Power to hold our Slow Walk event.

Fortunately, 2016 is looking to be a lot brighter on both fronts. Xcel have been picking up the pace in approving CSG project proposals lately. But more importantly, the Federal budget passed by Congress and signed by President Obama extends the 30 percent solar tax credit through the end of 2019 then gradually decreasing it to 10 percent at the start of 2022. If congress had done nothing, the 30% federal tax credit would have been abruptly dropped to 10% at the beginning of 2017. 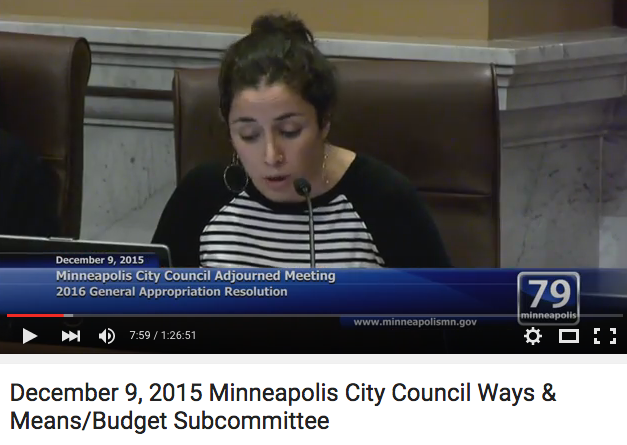 COMMUNITY POWER COMMENTS: Proposed only 2 hours before the hearing, this amendment provided very few details on the use of these funds  the precinct, but the hearing featured much opposition to the dedication of additional funding to fortify a precinct that has been at the center of so much community uproar after the police shooting of Jamar Clark. We stood in solidarity with MN Neighborhoods Organizing for Change (NOC), NAACP MPLS, & Black Lives Matter Minneapolis giving public comment against adding $600k towards the militarization of the police force and the fortification of the 4th precinct.

Problem landlords are within the scope of the Clean Energy Partnership

At the Tuesday November 10th Energy Vision Advisory Committee (EVAC) meeting, an official from Centerpoint said that "Bad landlords are a real problem, but it is something that is somewhat outside the scope of the Clean Energy Partnership." He later added that it that falls more to the regulatory enforcement of the city or to the State.
Those words clearly are not partnership thinking, and they seem to miss a core point of the problem the Partnership was intended to solve - how to combine the regulatory powers of the city, the programmatic abilities of the community, and the networks and vision of Minneapolis communities to solve real-world energy problems facing people in Minneapolis.
EVALUATING THE SCOPE OF THE PARTNERSHIP
Let’s take a look at the big picture on what the Clean Energy Partnership is intended to achieve so we can push back against any proposed reductions in the Partnership’s scope.
The definition statement on the Clean Energy Partnership’s own webpage http://mplscleanenergypartnership.org/about/) explicitly says: "The Minneapolis Clean Energy Partnership (CEP) is a new approach that partners the City of Minneapolis in a unique way with Xcel Energy and CenterPoint Energy, its electric and gas utilities, to help the City reach its Climate Action Plan and Energy Vision for 2040 goals."
If we look at the Energy Vision for 2040 (see https://cleanenergypartnership.files.wordpress.com/2014/12/mpls-energy-vision-9-3-13.pdf) it explicitly says:
"In 2040, Minneapolis’s energy system will provide reliable, affordable, local and clean energy services for Minneapolis homes, businesses, and institutions: sustaining the city’s economy and environment and contributing to a more socially just community."
Providing reliable, affordable and clean energy services and contributing to "a more socially just community" means, among other things, that all energy users have access to affordable energy that allows them to stay healthy in their homes. Since the Partnership is clearly in service of this vision, the Clean Energy Partnership must help tenants who live in poorly maintained housing secure affordable home energy and adequate building maintenance to ensure home comfort. So bad landlords are definitely in the scope, at least as it refers to justice on energy issues.
Read more

Once there are numerous successful examples of community solar gardens for people to see, it will tell a new story of renewable energy as a pathway out of energy poverty and toward prosperity. Since Minnesota passed its Community Solar Garden law in May 2013, individuals and organizations finally have a clear path to reap the benefits of solar energy — no fuel cost, no moving parts, no emissions — without needing the space or capital to install solar on their own property. The power generated from Community Solar Gardens (CSGs) will go onto the electric grid, and CSG subscribers will be credited at a solar-friendly rate that results in savings of 5 percent or more on electric bills! Community Solar will be affordable to anyone who pays an electric bill because subscriptions can be offered through a pay-as-you-go process.