Join Growth & Justice as we welcome Van Jones to the Twin Cities! 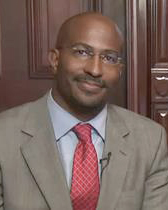 Van Jones is an internationally recognized pioneer in human rights and clean energy innovation, and the president and co-founder of Rebuild the Dream, a think tank that advocates for economic justice. Jones has written two New York Times bestsellers: The Green Collar Economy, the definitive book on green jobs, and Rebuild the Dream, a roadmap for progressives in 2012 and beyond. His work and advocacy synchronizes with Growth & Justice’s ambitions to broaden prosperity by making smart investments in practical solutions that improve our human capital and physical infrastructure.

Jones was an early green jobs advisor in the Obama administration and co-founded two other social justice organizations: the Ella Baker Center for Human Rights and Color of Change. He is a current CNN contributor and was named one of TIME magazine's 100 most influential people in the world.

Get your tickets today! Get you Ticket HERE!