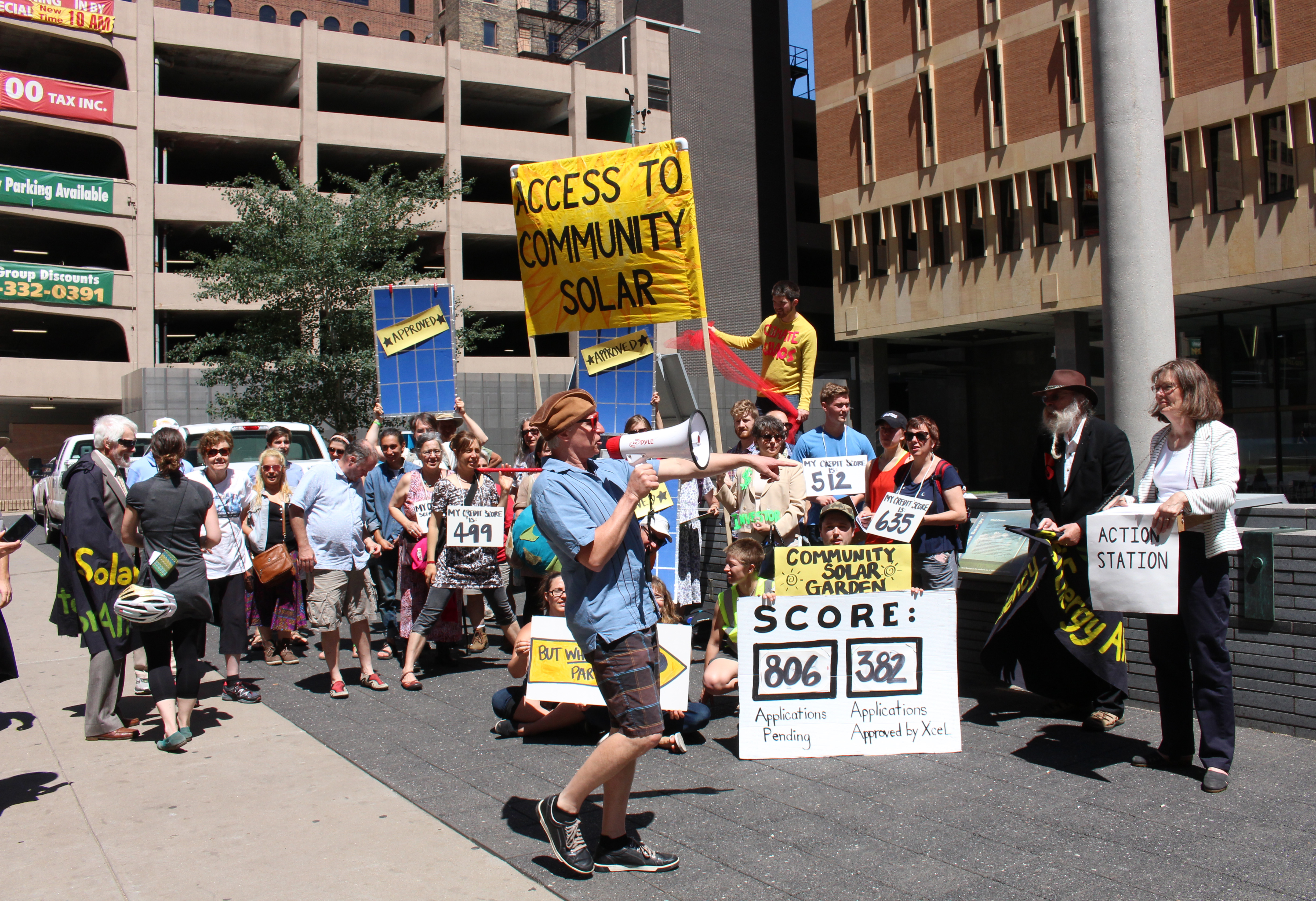 Back in 2015, we collected some well-documented info about regulatory actions Xcel took to delay and shrink the rollout of their CSG program.     We did our November 9th, 2015 “Slow Walk” street theater event to draw attention to the slow pace which Xcel was approving CSG Project applications at the time. 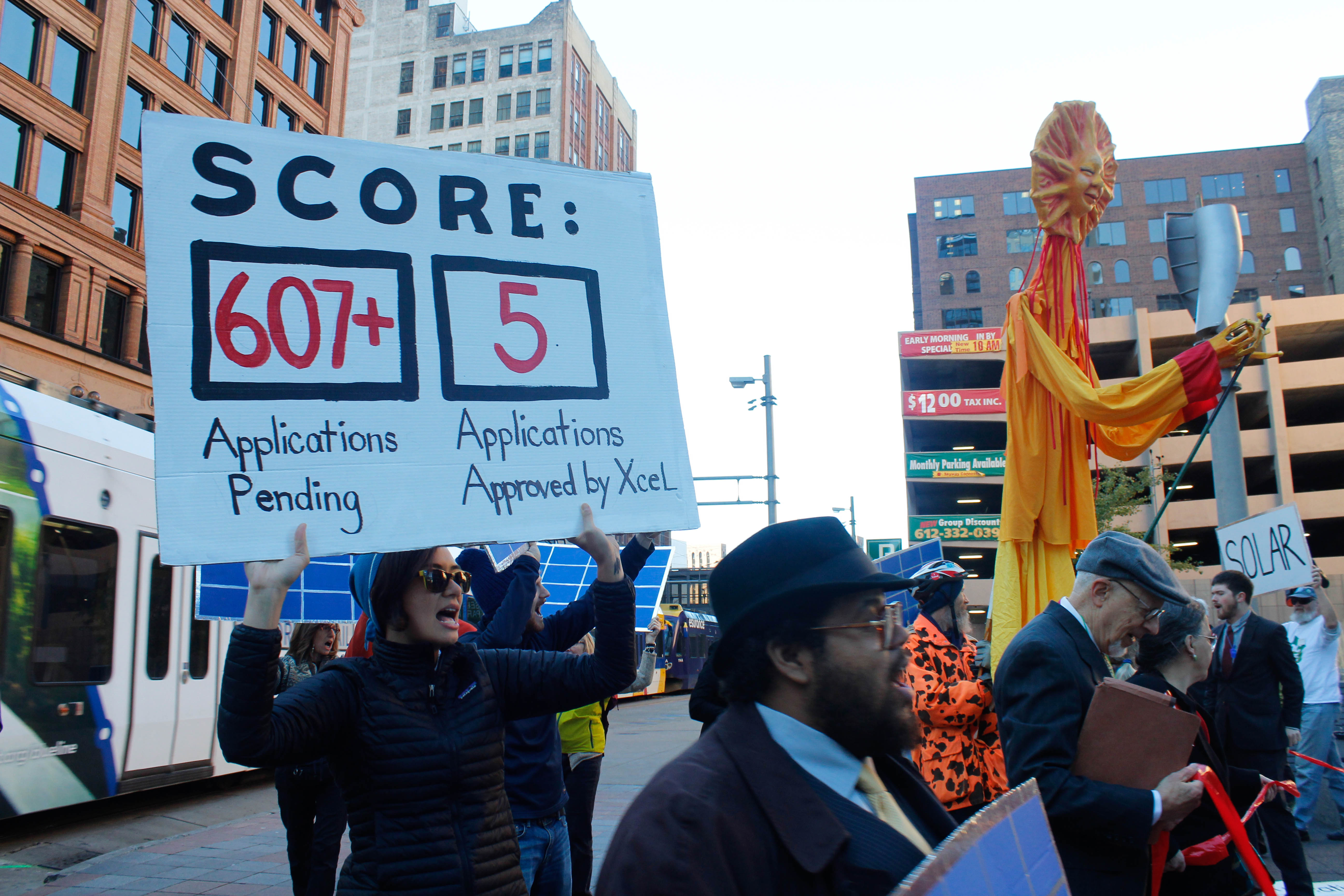 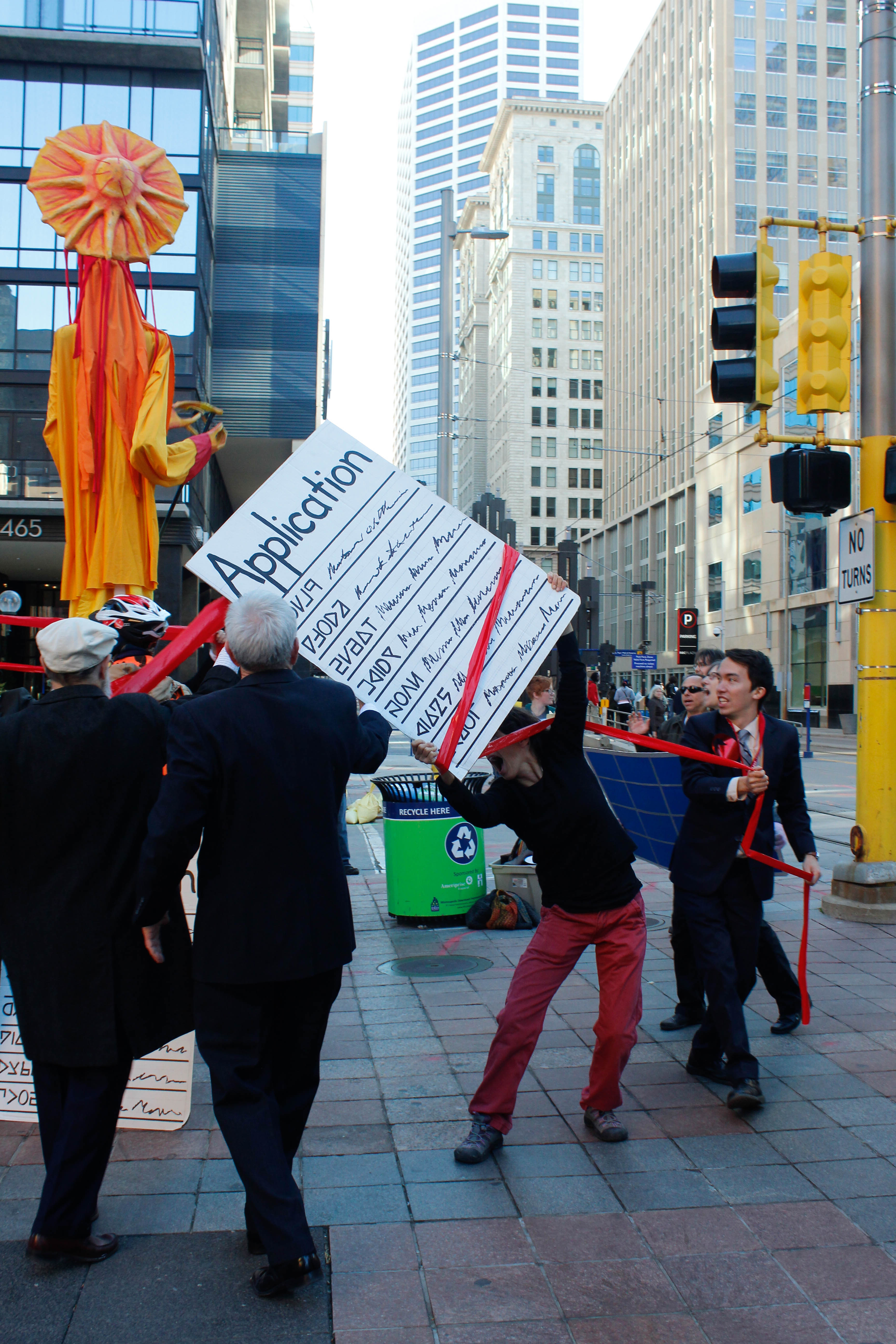 What we have to remember about Slow Walk event, was that it came at a time which CSG project developers were particularly nervous anticipating that the US Congress would let federal solar credits expire at the end of 2015. 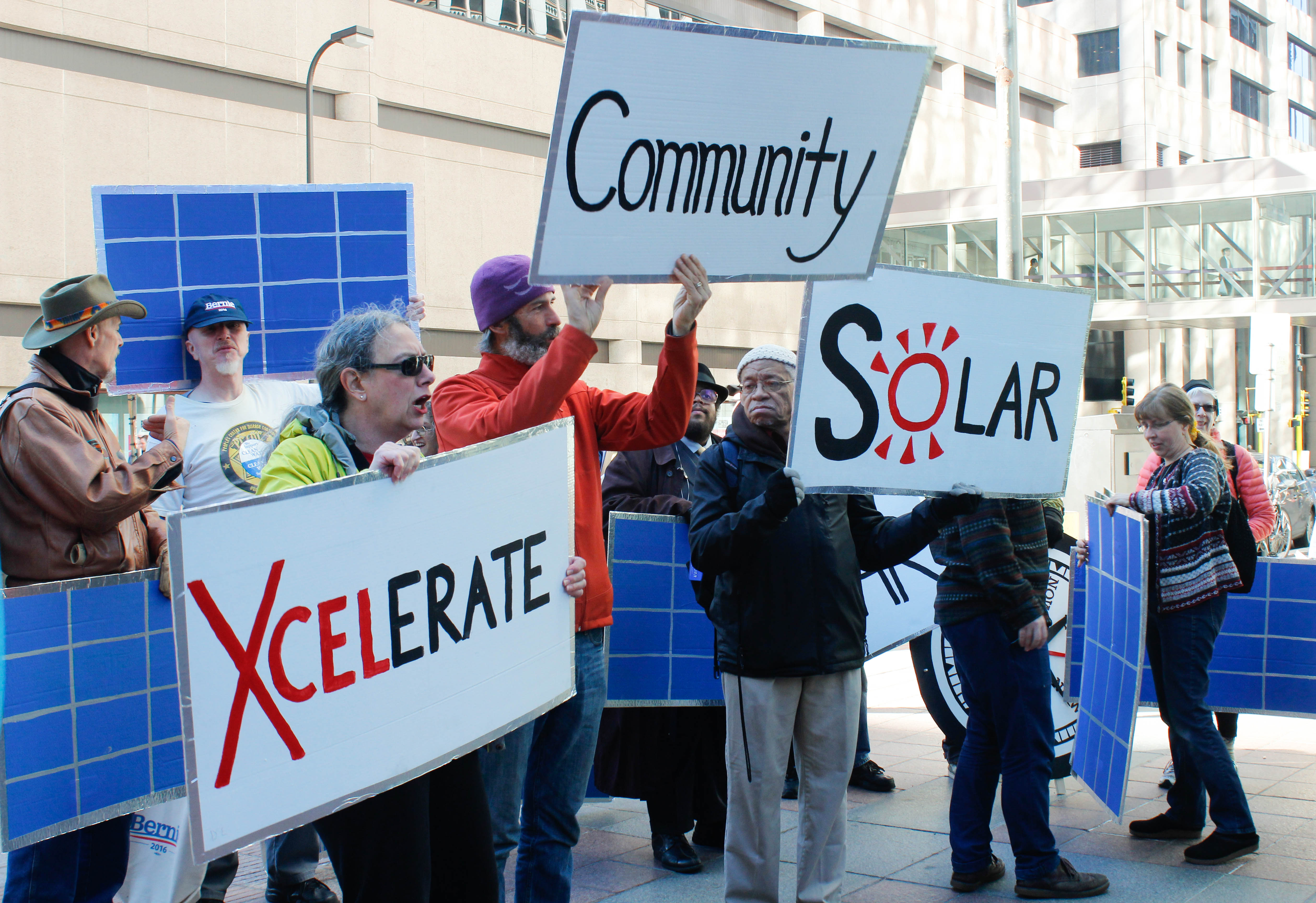 At the Slow Walk, we promised to do a similar follow-up event based on how Xcel responded. That manifested with our “Solar Solstice” direct action street theater event on June 21st, 2016.

Our message was quite a bit more nuanced at our Solar Solstice event. We half thanked Xcel Energy for approving more CSG projects and half petitioned Xcel to take specific steps to make Community Solar more equitable and accessible. 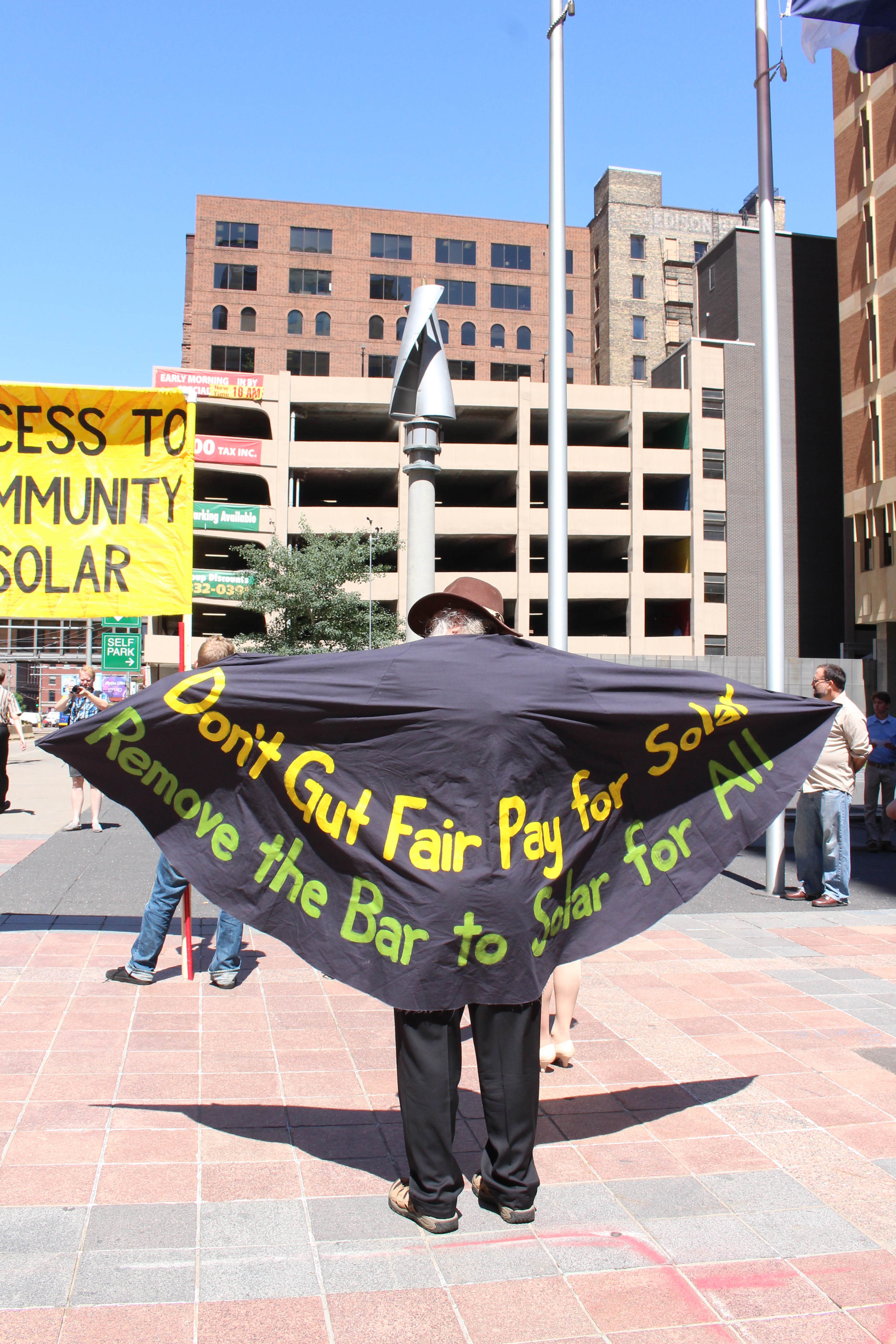 HOW DID XCEL RESPOND TO OUR STREET THEATER EVENTS?

Overall, we have mixed and split reactions to both of our direct action street theater events.

Xcel responded in a positive way to our Slow Walk direct action, such as becoming more transparent the status of their CSG projects. SEE LINK  However, they seemed to rebuff our main asks from our Solar Solstice event which included “not gutting fair pay for Community Solar” (to open access to low-income subscribers) and “endorsing tariff-based on-bill repayment” (to eliminate the need for a credit requirement to participate in solar and to streamline the billing).

At a Public Utilities Commission (PUC) hearing the next month, despite what we asked, Xcel Energy stuck with their request to reduce the compensation rate for their CSG customers.

In 2015 and 2016 Xcel has now gotten better at the general operation of their side of the community solar garden program, and we now see fewer process delays than in 2015 (though some still exist). However, the manner in which they tried to slow the program down through lowering the CSG rates shows Xcel upper management was still not very happy about the CSG program despite marketing the program as a way to reinforce a positive environmental reputation.

WHY THE RATE OF CSG BILL CREDITS IS CRUCIAL

Xcel’s Community Solar customers pay a CSG developer (such as Sunshare, Cooperative Energy Futures etc.) for the solar power these project developers provide to the grid. And instead of getting a regular bill, Xcel offers CSG customers a “negative bill” of monetary credits for the regular electricity mix that they do not have to pay for as a result of subscribing to a CSG. If the CSG bill credit rate is higher than Xcel’s regular electricity mix, then low and middle income could use a CSG subscription to lower their energy costs and demand for the program becomes large. If the CSG bill credit rate is lower than Xcel’s regular electricity mix, then a CSG subscription becomes a premium product for customers willing and able to pay a bit more and demand for the program becomes limited. But it seems from the beginning, the utility only wanted community solar to be a niche boutique market for enviro-minded customers who are willing to pay a bit more, thus fitting their pattern with Windsource and Renewable Connect program offerings.

By wanting to lower the CSG credit rates, they clearly want to prevent the CSG program from becoming something that the lower income could use to save on their electricity bills.

Meanwhile Community Power and the Just Solar Coalition has a very different and contrasting vision: Using Community Solar to tell a new story of renewable power as a pathway out of energy poverty and toward prosperity.

Since this time, Community Power has supported CSG projects like Shiloh Temple in North Minneapolis.

Our best assessment is that Xcel wants to keep community solar small and focus renewable energy development on utility-owned projects that do not deliver the same community benefit.

WHAT HAS HAPPENED SINCE OUR LATEST STREET THEATER EVENT?

The outcome of this July 2016 hearing was the PUC switching the CSG rates to the Value of Solar (VOS) methodology without revisiting their 2015 decision on co-location. This was a step backward but not as damaging as Xcel was requesting. This change meant that we would need a residential and low-income adder into the CSG credit rates in order to make the program accessible and equitable in Community Power’s terms.

Xcel created uncertainty through their application of the VOS methodology, and has continued to oppose a residential adder to VOS.

The PUC was not quick to be helpful as they have kept the process dragging on for 2 years with no residential adder  UPDATE: Finally on Oct 11, 2018, the MN PUC at last gave a 1.5 cent per KWH residential adder for CSG Subscribers. But this boost will largely be cancelled out by Xcel's proposed reduction in the VOS rates for 2019.

Given these circumstances, how has the Community solar program manifested? Almost 90% of the subscriber capacity are commercial and industrial customers. Of the ~10% that is residential, it is virtually entirely upper income customers who have high credit scores.

Xcel has been pointing toward this dominance of large commercial subscribers as evidence that the solar garden program is an unfair situation the ratepayers as a whole subsidizing large commercial subscribers. They have kept up this argument even under the VOS, which by its definition is only compensating for the value solar provides to the grid, and is thus not a subsidy, using now outdated logic that the old rates were a subsidy to big subscribers.

Minnesota’s Community Solar Program is still the best in the county because the State Legislature placed no cap on the program capacity. But it is far less than it could be.