This past April Fool’s day, Community Power and Partners performed a street theater of a press conference. We drew attention toward Xcel Energy intending to sink $650 million ratepayer dollars into purchasing a Mankato natural gas plant. Mr. Monopoly in costume, spoke for Xcel and gave a prepared statement to the public and press: “We are overanxious to be able to give this vision and long-term debt with the Minnesota public." While the press conference was of course satirical, the script did involve actual direct quotes from Xcel CEO Ben Fowke, Xcel Govt Affairs Lobbyist Rick Evans, and recent Xcel Regulatory Consultant James Albers. 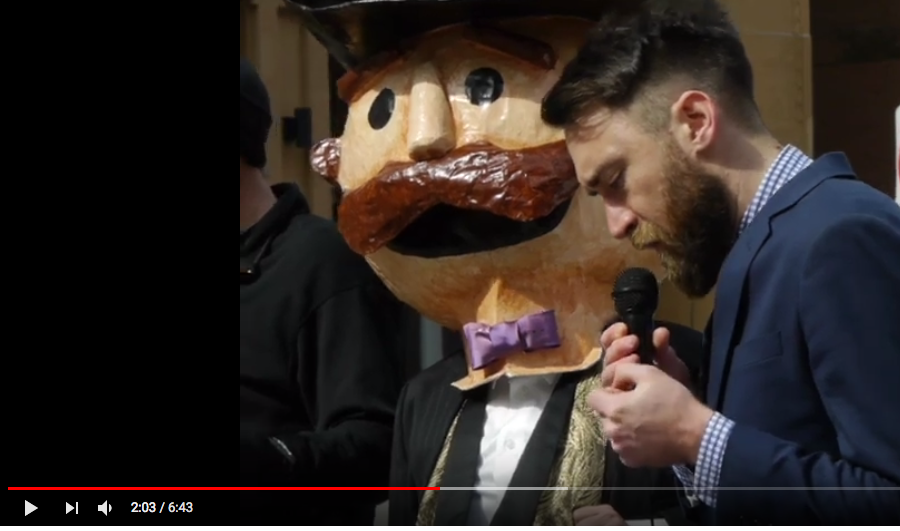 Click Image above for the final cut of the video !

Watch the full You Tube version of the video or the full Livestream or the of our press conference performance outside Xcel Headquarters April 1st, or read the full transcript below. There's also the livestream here from a more front-facing angle: http://bit.ly/2OF0KJV

Comments to the MN Public Utilities Commission on the Mankato Natural gas plant proposal will close on April 30th. It was preceded by numerous comments opposing the purchase and news coverage from Frank Jossi of Midwest Energy News.

The following day on April 2nd, Xcel Energy officials also stated their case for the Mankato Gas Plant acquisition (see full quote on blogpost) during an event where the public was invited to give feedback and questions to Xcel on its on its to-be-released long-term energy plan.

“Thank you members of the press and public for gathering outside the company’s headquarters for today’s exciting announcement from Xcel’s chief philosopher, “action-man,” and spokesperson Mr. Moneybags who has prepared the following statement to introduce the public to Xcel’s visionary 40-year energy plan …

“We are over-anxious to bring what some would call a “radical” proposal to you, one that disrupts the normal, long-term planning process. A proposal that has been called an “extremely high purchase price” “clearly not in the best interest of the public and ratepayers” “heavily redacted pleading” “unpersuasive” and “not shown to be reasonable” by the Office of the Attorney General, the Department of Commerce, and an operator of a gas plants.

But here’s what they don’t know: We have been inspired by the responsible actions taken by climate activists around the world to lock themselves to fossil fuel infrastructure in a fight for humanity’s survival. It is high time that we at Xcel Energy use our power and influence to lock ourselves to fossil fuel infrastructure for this company’s survival.

We are proud to announce that Xcel is locking ourselves to the fracked gas plant in Mankato by investing $650 million ratepayer dollars in its purchase. To symbolize our new commitments, we will replace this wind turbine blade with a life-size replica of a natural gas plant, pictured here [gesture], and this chain to link it unrectifiably to Minnesotans’ energy bills. “We hope that our customers will come to us first [...] as a trusted energy partner.” And with this chainlink we won’t just hope...we’ll know they have to  -- for decades to come.

At Xcel Energy, “We believe in energy in a big way, in the right way. So logically, because as a monopoly we are biggest, we are also right. But things are changing rapidly in the energy industry. There are people who want to come between us and our customers, there are people who think the utility model should be turned upside down. And like our Community Solar Garden program shows - are customers are becoming our competition. That’s why “we’re [...] driving a competitive culture within Xcel. So we’re prepared to win in a more competitive environment.”

So how does a monopoly like Xcel compete? Well, as I’ve said, we didn’t get here by thinking small and we get heartburn thinking about the little guys. We’ve been in our communities for 100 years, I’d like to think we’ll be in our communities for another 100 years. And because of a revolution in fracking, now there’s hundreds of years of supply.” Fate? ...Certainly not! Serendipity? Maybe!

We want to grow our natural gas business. We’ve been a leader in natural gas. If you're seen as a leader, you typically get treated better [and] it creates better investment opportunities for you, so we're excited about it." We think that positions us well to move upstream a bit, branching out to own more pipelines than we already do today. And potentially talking with our regulators to rate-base natural gas in ways that provide [...] investment opportunities for our shareholders.” As our company lobbyist Rick Evans said at legislative hearings just last week: “If we buy it, it’s going to make money.”

Lastly, I want to underscore Xcel’s commitment at to future generations. As our own CEO has said: “some of my background when I first came into the energy industry was used to diversify and get out of some bad decisions that utilities made in the 80s”  We must leave that same opportunity to future Xcel CEOs, by making bad decisions now that they have to fix later.

I’d like to close with a trusty phrase our CEO loves to use in public speeches: “Wind is the fuel of tomorrow, and it’s on sale today. But we going to buy 20-40 years of fracked gas. We won’t bet billions on a balance sheet on one single plant but are simply frantic to buy one for a little less than a billion.

ASSISTANT TO MR. MONOPOLY: Regardless of when we have to shut down this plant it will be a value add to shareholders. If we buy in June and shut it down in September, we still get reimbursed from the purchase. It’s what’s fair. Even if we don’t turn on the plant at all, we went through a lot of trouble and paperwork to get it approved and will be reimbursed the $650 million for that effort.

PRESS: What about the economy-wide carbon-reduction goals of 80% reduction by 2050, and the talks of 100% renewables?

ASSISTANT TO MR. MONOPOLY: At Xcel we move at the speed of value, as our CEO says. And right now we don’t see shareholder value in that.

PRESS: Is the company concerned about possible increases in natural gas fuel costs?

ASSISTANT TO MR. MONOPOLY:: “Although current prices for market energy and natural gas are low, historically the price of these energy resources has been extremely volatile,” as James R. Alders our Regulatory Consultant has shared at the PUC. But no we are unconcerned.

PRESS: Given the acknowledged risk, how do you justify the purchase to shareholders?

ASSISTANT TO MR. MONOPOLY:: It is pretty simple math. The risk is shifted onto customers - the shareholders are well insulated from any risk. So it’s really quite an ingenious business model, and a long tradition of the utility industry. We buy the plant, get the allowed 10-12% ROI, and from their on out its the customers bag.

PRESS: Xcel Energy has stated on the record that energy-users increasingly want cleaner energy, and affordable energy. Multiple parties expressed concerns that this is neither clean nor affordable for customers - response?

ASSISTANT TO MR. MONOPOLY: If customers wanted to be in charge of their energy, they should just do it themselves.

PRESS: Isn’t Xcel a monopoly utility? How would customers provide their own energy?

ASSISTANT TO MR. MONOPOLY: Let’s not get into that.