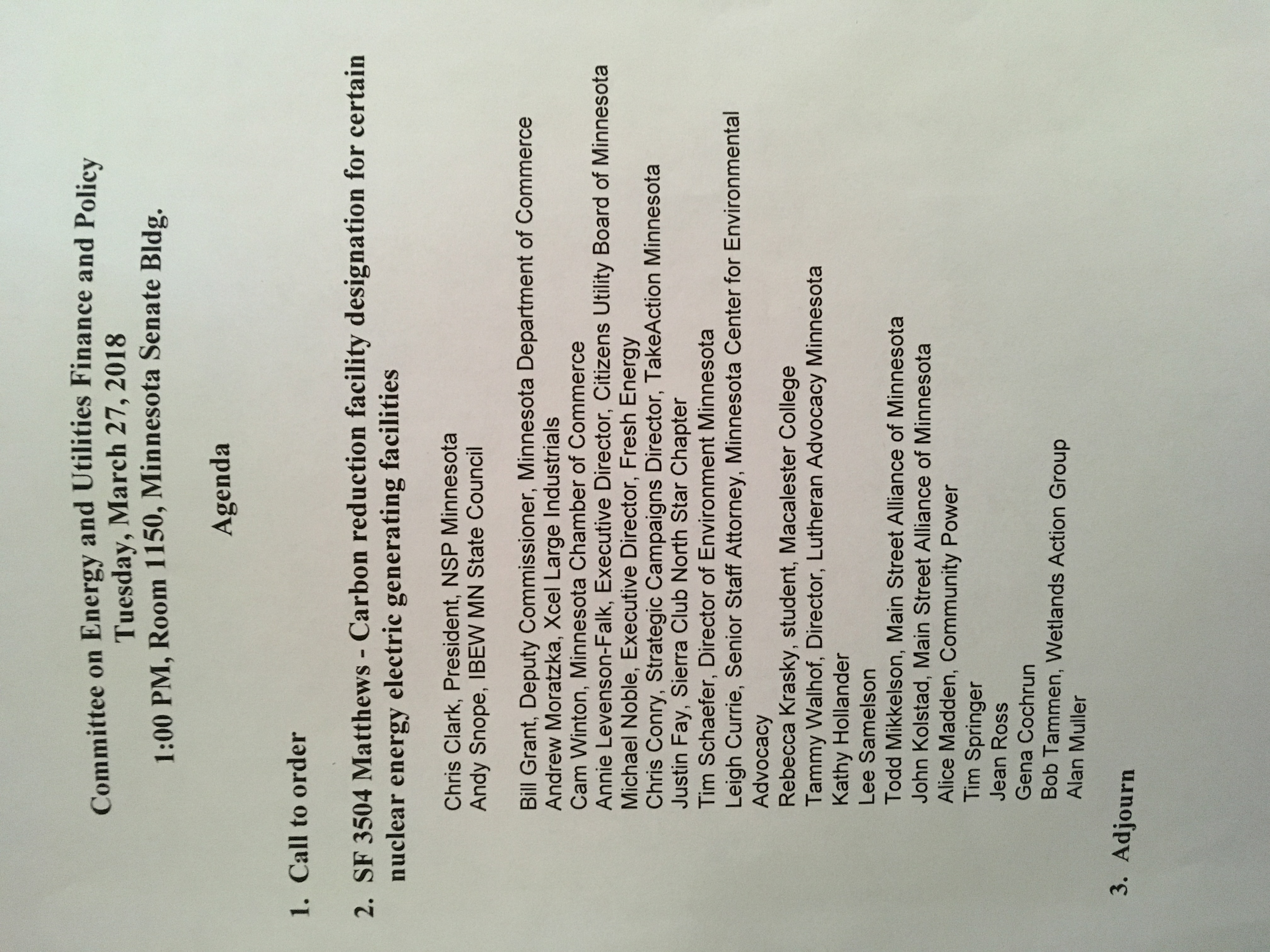 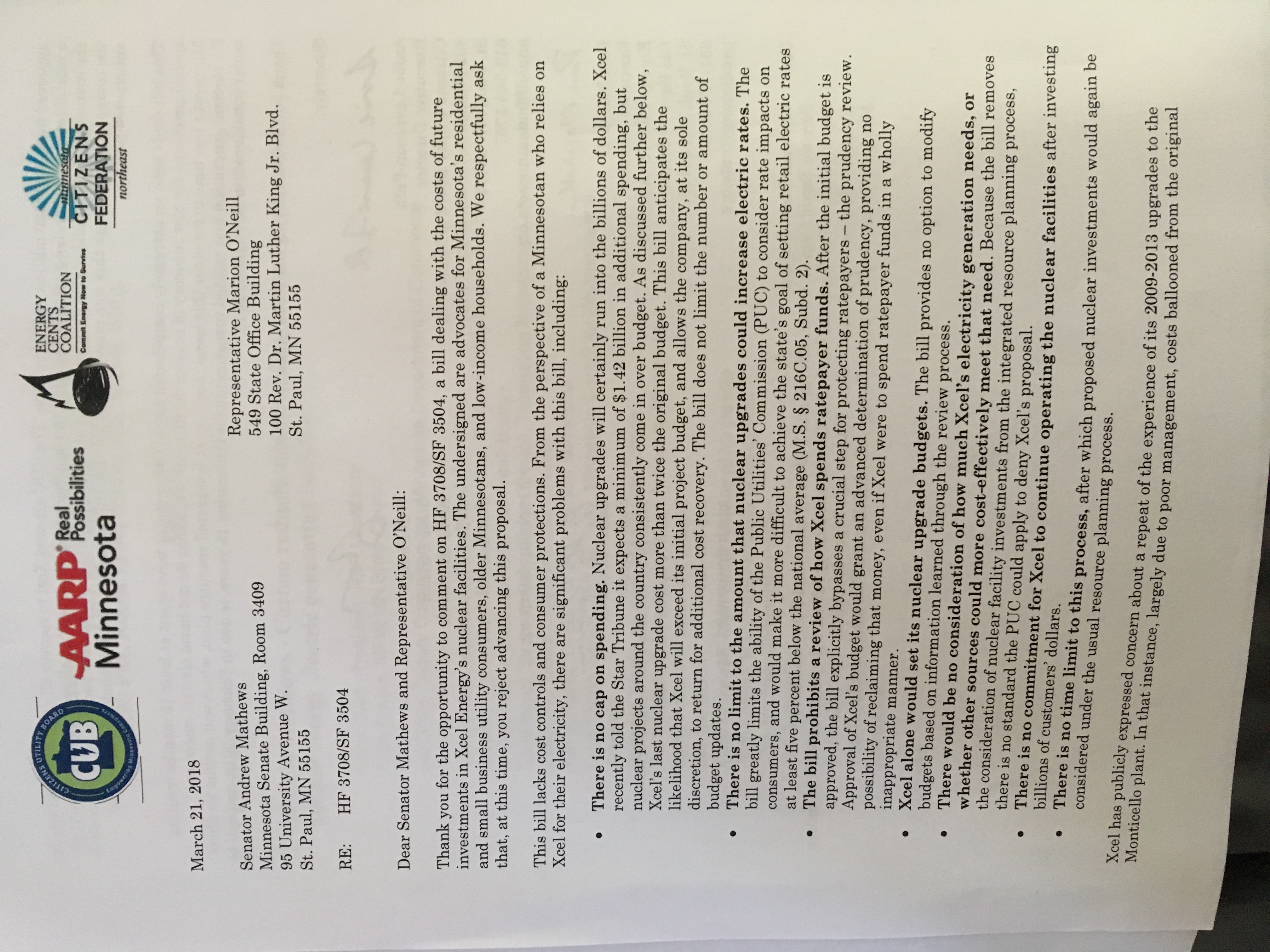 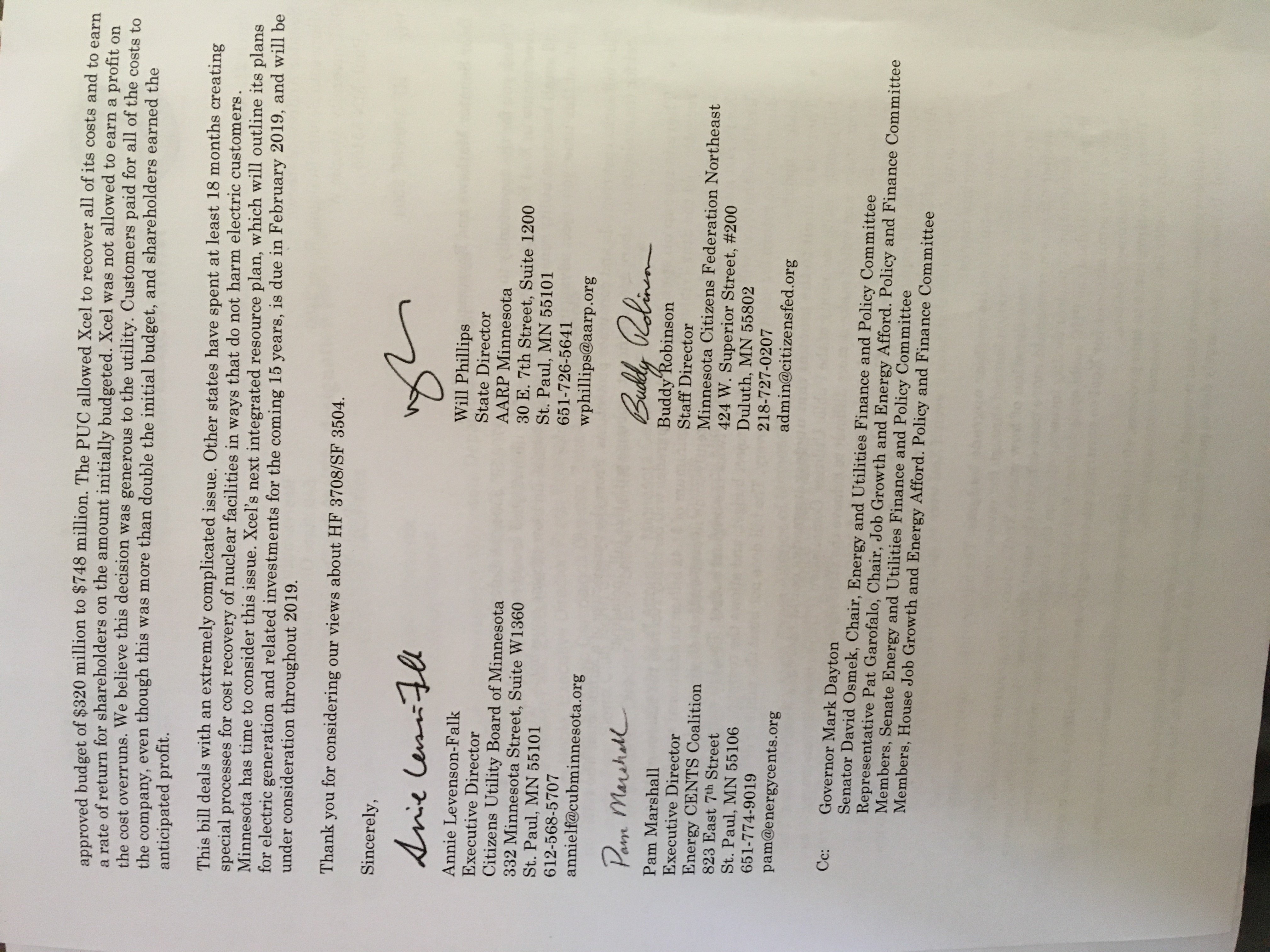 Opposition to SF 3504 presented a rare instance where the MN Chamber of Commerce, large industrial energy users were in a coalition with the full spectrum of environmental groups and the MN Department of Commerce.

The Minnesota Chamber of Commerce remained in opposition to SF 3504 bill despite recognizing “the small improvements” committee members made to the bill before the hearing.

Sarah Johnson Phillips of Xcel Large Industrials (an Ad Hoc consortium of large industrial users of electricity) said that SF 3504 undermines a settlement agreement from the last rate case where parties agreed to a process that Xcel would bear the burden of proof for cost prudency.

Bill Grant with the Department of commerce echoed our framing that the proposed bill “gives Xcel too much of a blank check”.

In addition to hearing our blank check framing catch on, we also heard a common theme of risk-shifting emerge among the 8 people who did speak in opposition.

Johnson Phillips as well as Cam Winton of the MN Chamber of Commerce said the bill shifted an enormous amount of risk from Xcel onto its ratepayers. Matt Privatsky of Fresh Energy stated that “the risk to ratepayers is too much” and Chris Conry of Take Action MN also stated concerns about “the shifting of risk”. Justin Fay of the Sierra Club stated that the bill provides certainty for the Xcel shareholder, but not for anyone else.

A few speakers articulated this concept in more detail.

Tim Schaeffer of the Citizen funded non-profit Environment MN said that good energy policy gets utilities to weigh risks and costs, not offload them onto ratepayers and that they thereby support "real renewables that do not include massive insurance subsidies".

Bill Grant of the Dept of Commerce said they were opposed to the bill because it enables premature decisions and is potentially harmful to consumers and that the most prudent route is to simply use the Integrated Resource Plan (IRP) process already in place to ensure cost-effectiveness. He said this bill “puts cart before the horse” by accepting nuclear project cost-recovery before the rest of the IRP process.

WHAT DID XCEL HAVE TO SAY?

Chris Clark, president of Xcel’s subsidiary Northern States Power, was the first speaker at the public hearing and was further questioned for the extensive time period after public commentary was closed.

At the beginning of the March 27th hearing, Committee Chair Sen. David Osmek instructed commenters to keep their testimony related to the bill at hand and not about getting into the weeds about nuclear power in general.

However, Chris Clark spoke plenty about Nuclear energy in general. He asked the legislature formally recognize the value of nuclear energy a part of “a safe and diverse” mix of energy resources.

In place of our characterization of Xcel seeking a blank check, Chris Clark kept describing his Xcel’s motives in lobbying for this bill as Xcel “seeking to provide a tool for the PUC to use”.  Clark said he thought it was important for the legislature to weigh in by enabling the Commission to have a tool to recognize the value of nuclear energy in MN’s power mix.

Clark pointed to how large Xcel customers, particularly municipal governments and corporations such as Target have ambitious clean energy goals. And he used that to justify support for the SF 3504 on the presumption of nuclear power being “clean”. He also argued that part of valuing carbon reduction is the need to ensure Xcel does not transition from nuclear to natural gas.

(The latter is rather duplicitous argument given that Xcel pulled off a similar regulatory workaround last year for a billion-dollar new natural gas plant).

Rather than our characterization of SF 3504 usurping the PUC process, Clark said SF 3504 “complements” the PUC process. The obvious motive was for Xcel to have SF 3504 into state law in time to craft their 2019-2034 Integrated Resource Plan due next February.